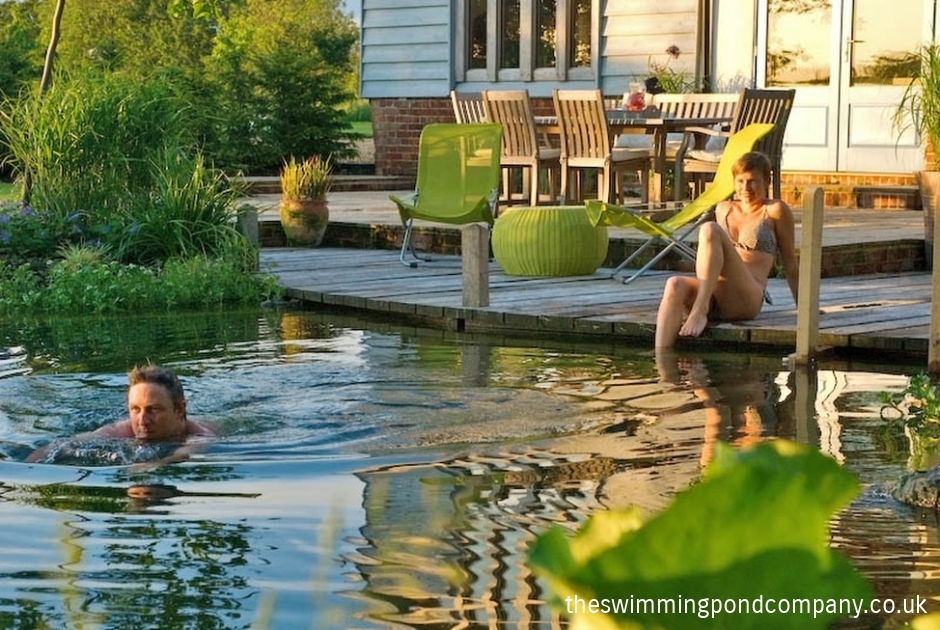 As our summers become sunnier, warmer and longer the desire to fly abroad for guaranteed sunshine seems less urgent. With flying becoming more expensive, not only in monetary terms, but also in terms of our carbon foot print that we leave behind, there are those who are not looking further than their own homes for a relaxing break. 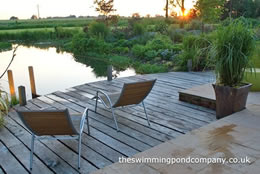 Ask Paul and Bianca Mercer where they would most like to go on holiday and they are likely to say “We are already here”! Which poses an interesting ecological argument. Looking out over the oak decking from their recently converted barn across a magnificent body of water to open countryside beyond, it is not hard to understand their reply.

Paul and his German wife moved into their home a few days before the end of 2004. While they both had extremely strong views on how their home was to take shape it was Paul who set about designing the garden and put the degree he had achieved in landscape and garden design a few years previously to good use. He points out how important it is when designing a garden that it completely relates to the home and vise versa.

Glass was used extensively throughout the barn with the intent of bringing as much of the garden into the living space as possible. “In my minds eye, the focal point of the garden was always going to be a large pond” says Paul and adds “We are instinctively drawn to the element of water for all kinds of reasons that include giving many of us an overwhelming sense of well-being.”

In their first summer at ‘Carpe Diem’ a feature about natural swimming ponds caught Paul’s attention in one of the Sunday Newspaper supplements. He recalls how he avidly read the feature and then read it again! “ I thought the concept was absolutely fantastic and the fact it has such a positive effect on the environment fitted in well with the philosophy of ensuring that everything that I did here would be of value to wildlife“.

Vivid travel memories of swimming in natural pools in the southern hemisphere come flooding back as Paul reflected on the article. “Anyone who has ever enjoyed swimming in a natural rock pool on a hot summer’s day will speak of a definite feeling of liberation and of connecting to the natural world that is simply not achieved in a conventional swimming pool. The natural swimming pond can recreate those feelings but in a garden setting“.

Paul goes on to say “It was one thing to have a beautiful pond in the heart of the garden that could look good for 12 months of the year, but to be able to swim in it too…… well who needs to fly to the Mediterranean?”

An old friend of Paul’s who had spent many years designing and constructing ponds and lakes was quickly tracked down. Having read everything that had ever been written about natural swimming ponds they quickly discovered that although it was a new concept in the UK, swimming ponds were already well established on the continent, particularly in Germany and Austria where the first one had been built in 1985.

Plans were drawn up as a design evolved and work quickly commenced on converting the existing pond into a fully operational swimming pond. The Swimming Pond Company was borne and the rest as they say is history. 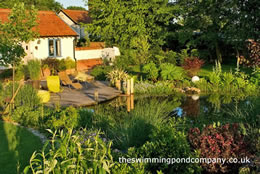 So how does it work? Essentially there are 2 main components to the natural swimming pond, which are separated by an internal wall that terminates approximately 20cm below the surface of the water thus allowing the 2 chemically free zones to meet.

Firstly, there is the swimming zone which is kept free of any plants to allow uninterrupted swimming and secondly the regeneration zone where all the plants that are so vital to the success of the swimming pond are located. In this latter zone the water can be relatively shallow and does not have to be exceed a depth of 60cm in it’s deepest part.

The plants act as living filters and provide a very important function by absorbing decomposing materials and bacteria, as well as pollutants in the form of nutrients and turning them into plant tissue and thereby cleansing the water. In order for the plants to be at their most efficient at keeping the water clear they grow in fine gravel so that all the nutrients necessary for the plants survival are taken directly from the water.

To aid this process, water is drawn down through the gravel by means of a suction pump via a series of perforated pipes thus giving the aquatic plants a constant source of nutrients. In addition, the water is also filtered as it is passes through the minerals before it is reintroduced into the swimming zone as clear water.

The swimming zone generally has a depth of between 1.2m and 2.2m and should not be less than 25m2 . It will have a solid base which means that any sediment that will naturally occur can be easily removed.

Native plants are used extensively in the regeneration zone, which not only gives the swimming pond a natural appearance but will also support a broad diversity of our native fauna. Although ornamental non-native aquatic plants can look extremely attractive they are becoming a real source of concern as they compete and take over from some of out native species along our river banks. The new introductions often do little to for the sustainable ecology of our waterways.

Paul enthuses, “It is astonishing how quickly beneficiaries establish themselves in a new body of water. Within just a few weeks the water can be teaming with life. Water boatman zigzag their way through the water and colourful dragonflies dart around the surface which are simply a joy to have around. Birds soon make full use of the margins as somewhere to bathe and quench their thirst and at night bats will soon discover a rich source of insects that hover above the water. And we can swim in it”!

As for the cost, it is generally regarded that swimming ponds can be more expensive than swimming pools and generally lie in the £350-400 per square metre bracket, but will ultimately depend on the specification. Running costs however are minimal. For those thinking of converting an existing swimming pool to a swimming pond the cost could decrease significantly providing there is the space in which to build the regeneration zone. 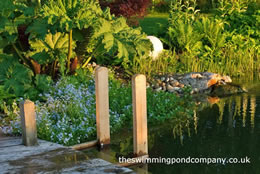 In conclusion, if you are looking for a magnificent garden feature that will grace the finest of gardens with year round visual appeal and if you want to be able to swim in soft natural water on a hot summer’s day while making a significant contribution to the environment – then a swimming pond is for you.