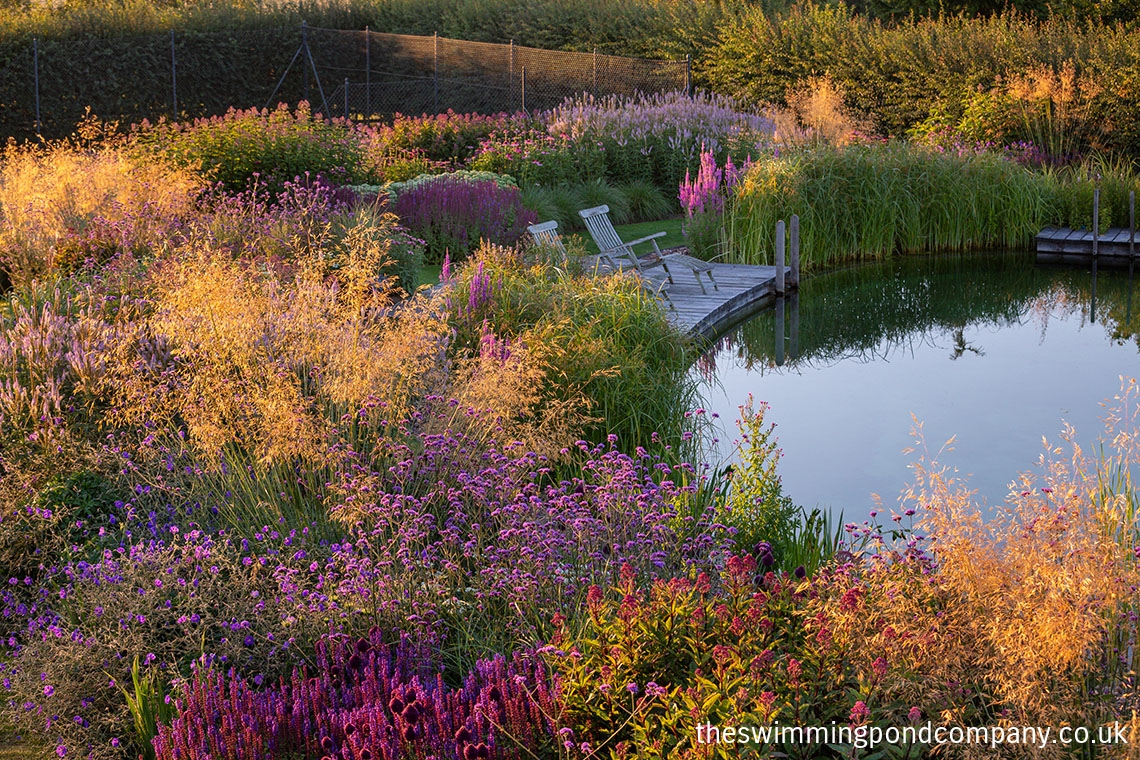 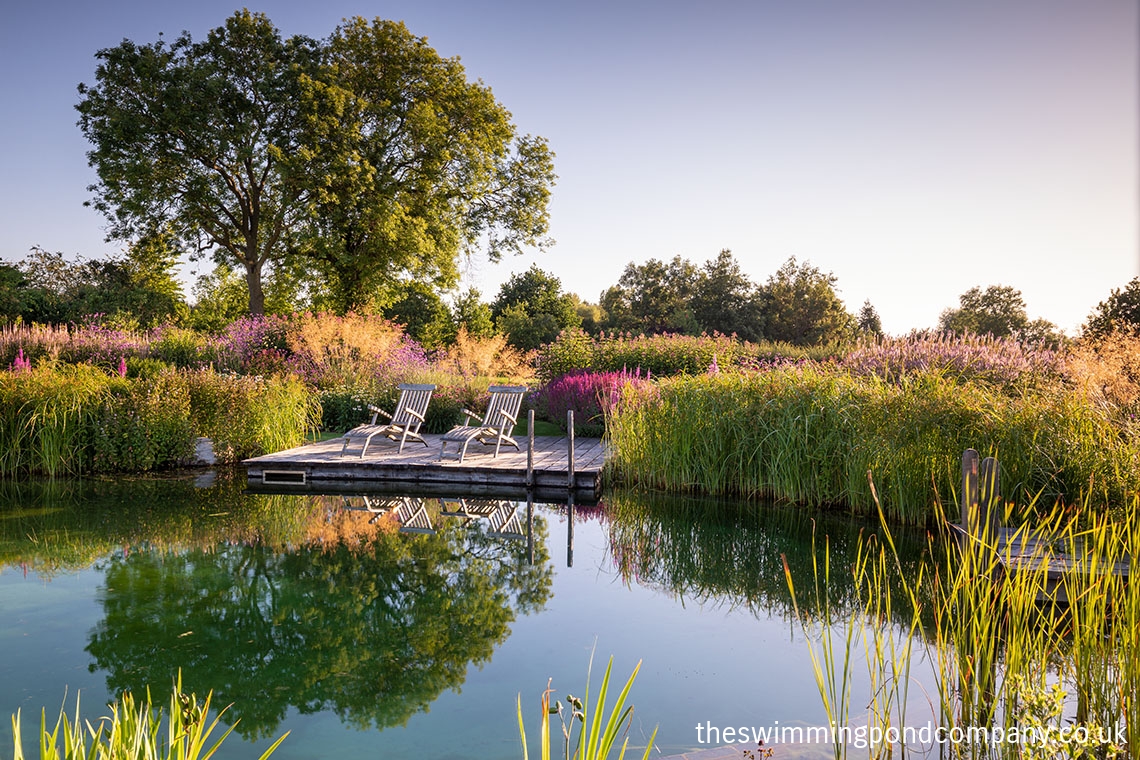 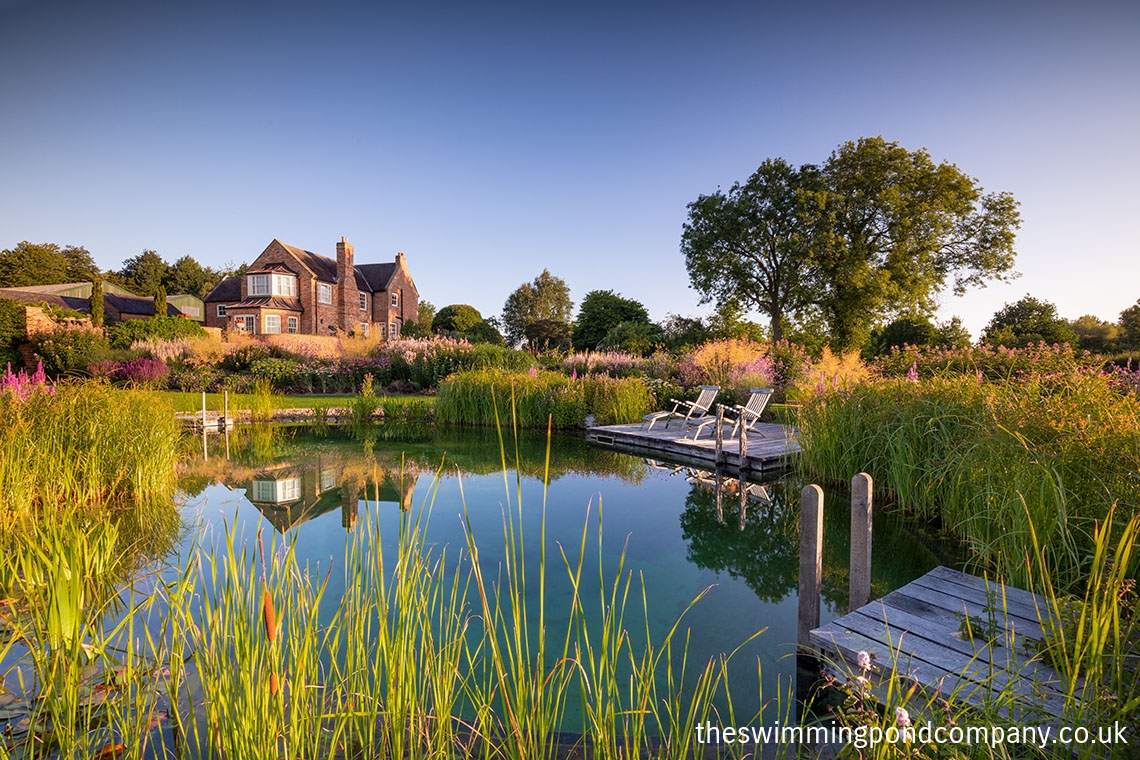 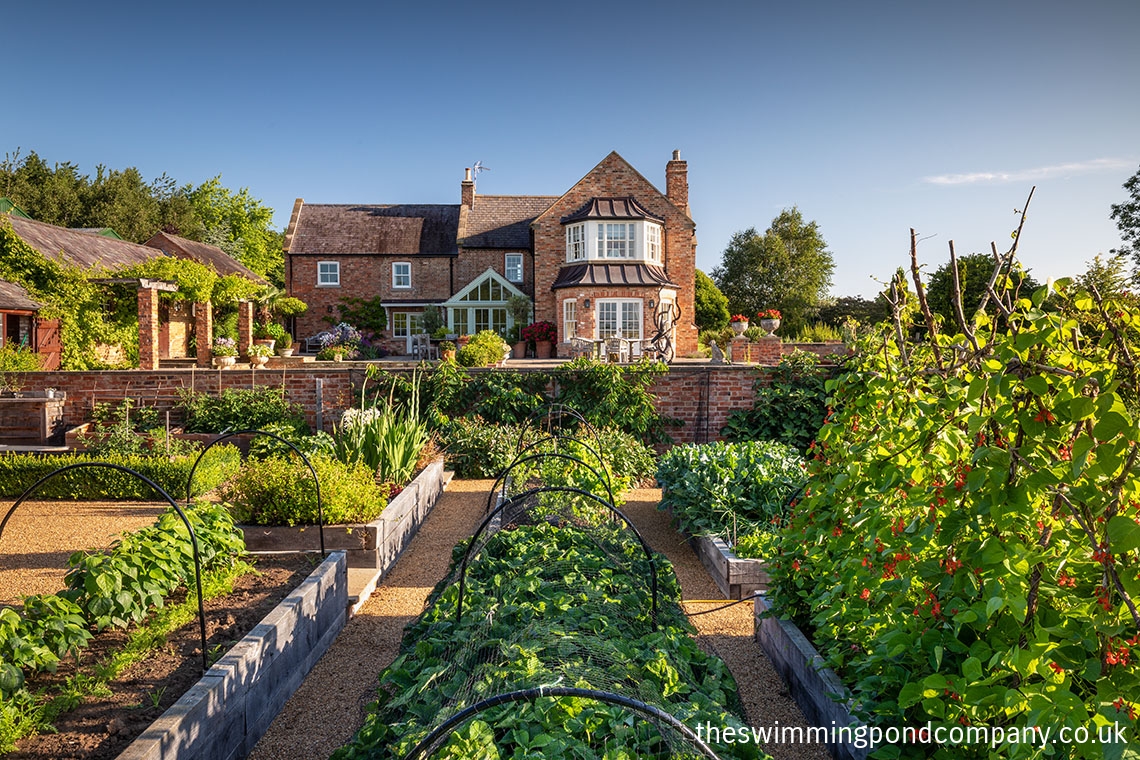 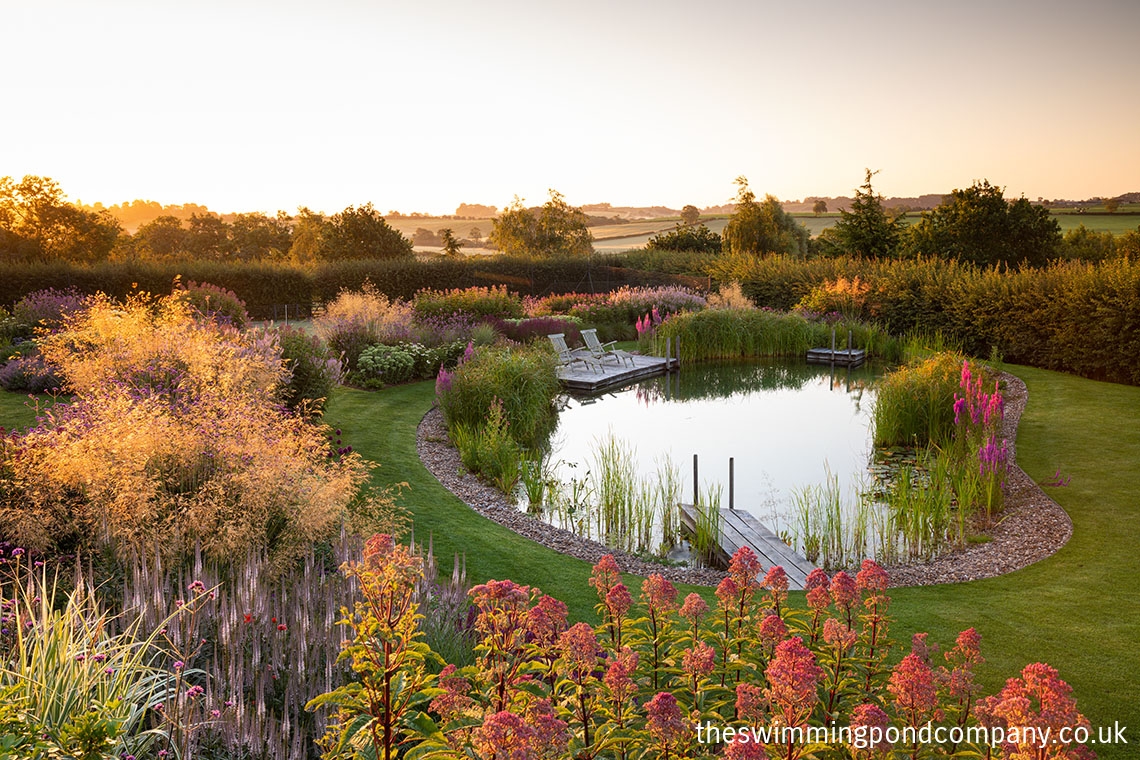 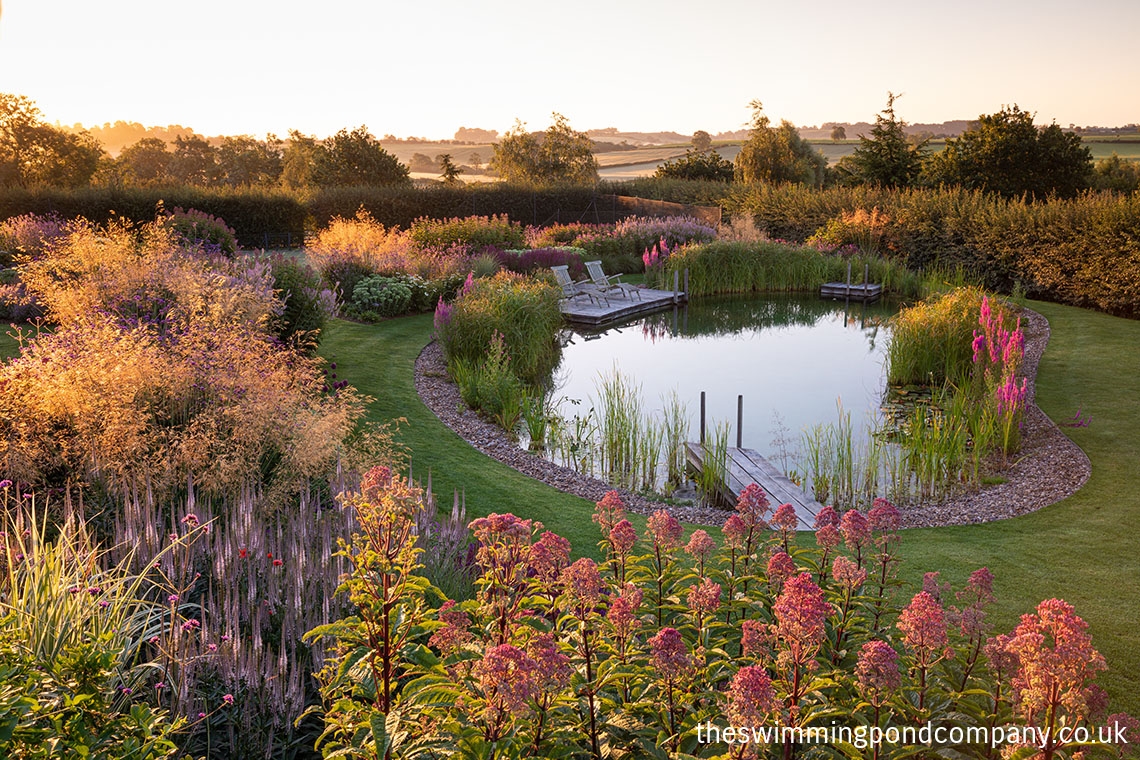 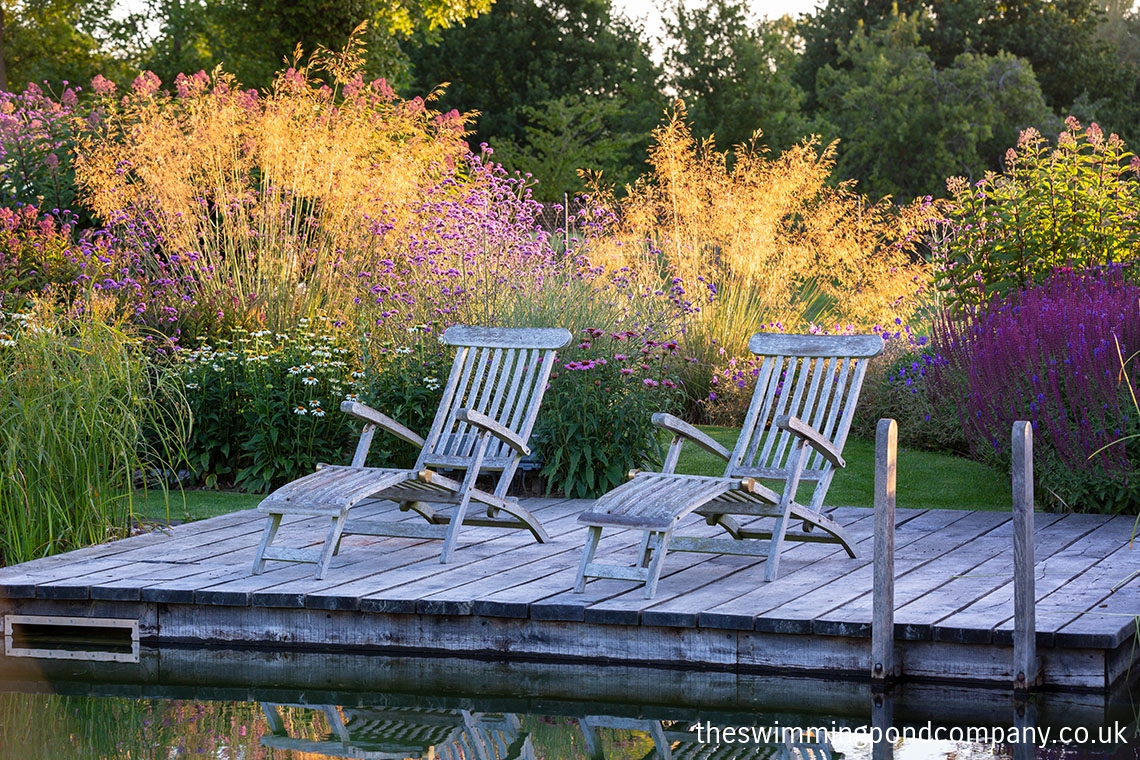 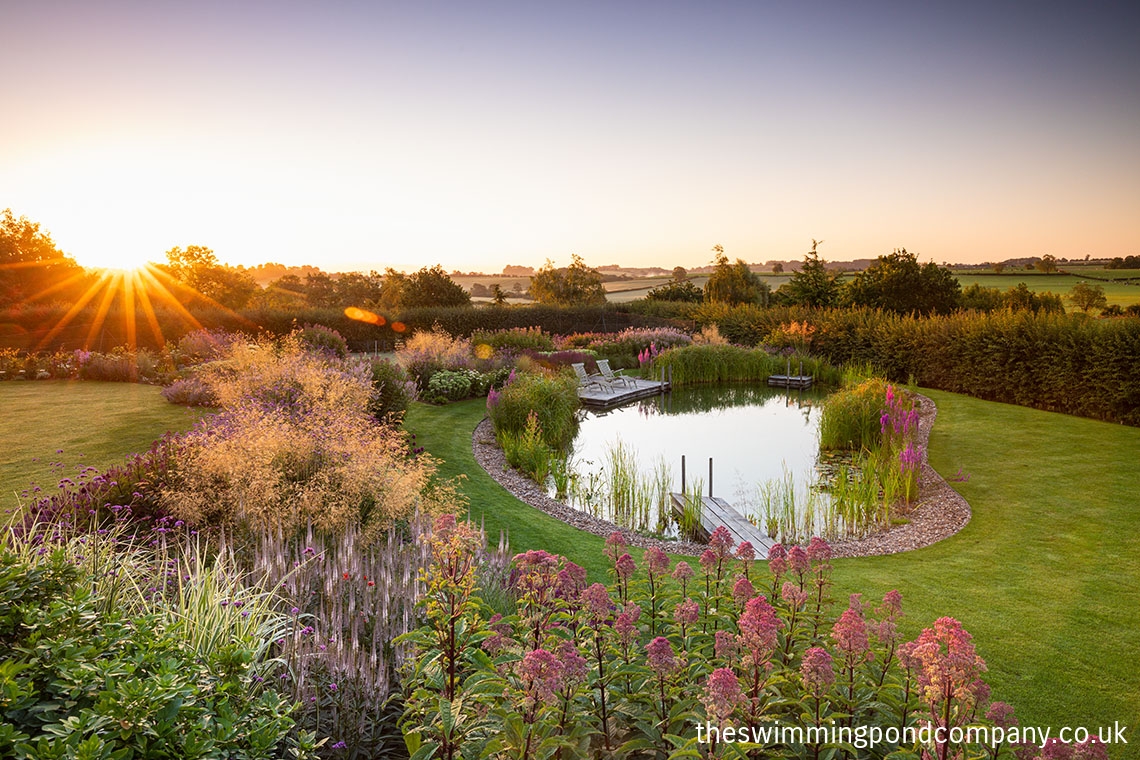 Sarah was the driving force behind this amazing project and had been keen to incorporate a swimming pond into her garden for a number of years.

The brief was to turn a piece of essentially overgrown wasteland into garden and connect it to the existing tennis court and the rest of the garden.  The swimming pond was to be the central feature of the space.  Additionally, Sarah had always wanted a kitchen garden and asked for one to be incorporated into the design.

This project was made more challenging because this piece of land had a significant slope and was separated from the main upper garden by a substantial retaining wall.  Connecting the kitchen garden to the swimming pond also came with its challenges.  Sarah also loved her existing flower borders and wanted to link those borders to new borders set around the swimming pond.

The incredible views across the Leicestershire countryside were to play an important role in this design and are enjoyed from the upper part of the existing garden around the house. So, the position of the swimming pond was vital and has consequently been positioned at the bottom of the slope just above the tennis court. This means that the outstanding views are enhanced by looking across the swimming pond.

The 180sm swimming pond has a swimming area of 90sm and a total of 3 entry points comprising two decks and jetty constructed in green oak.  Traditional green oak ladder steps make for attractive features in their own right.

To partly deal with the gradient of the area we have used wide sweeping borders to disguise the slope down to the tennis court and the link between the area of the swimming pond and the upper garden.  The prairie style borders have lots of plant repetition and compliment the swimming pond beautifully.  Some of these plant species have been planted into the existing borders to harmonise the two areas together.

A series of stone steps connect the upper garden to the area of the swimming pond and sit between lush planting.

The kitchen garden was constructed with raised beds on the upper part of the slope on a series of terraces accessed by paved and shingle pathways.  The separation between the kitchen garden and the swimming pond has been achieved with the planting of 2.5m high pleached hornbeam with a laurel hedge running along its length.

The entrance to the kitchen garden is centred on the swimming pond jetty and is formed by an archway set into the pleached hornbeam.  It is lovely to get glimpses of the water, whilst working in the kitchen garden.

The only issue that John has with the whole project is that Sarah would prefer to be in her beautiful garden than go away on holiday!  But he really loves it too, as do we!