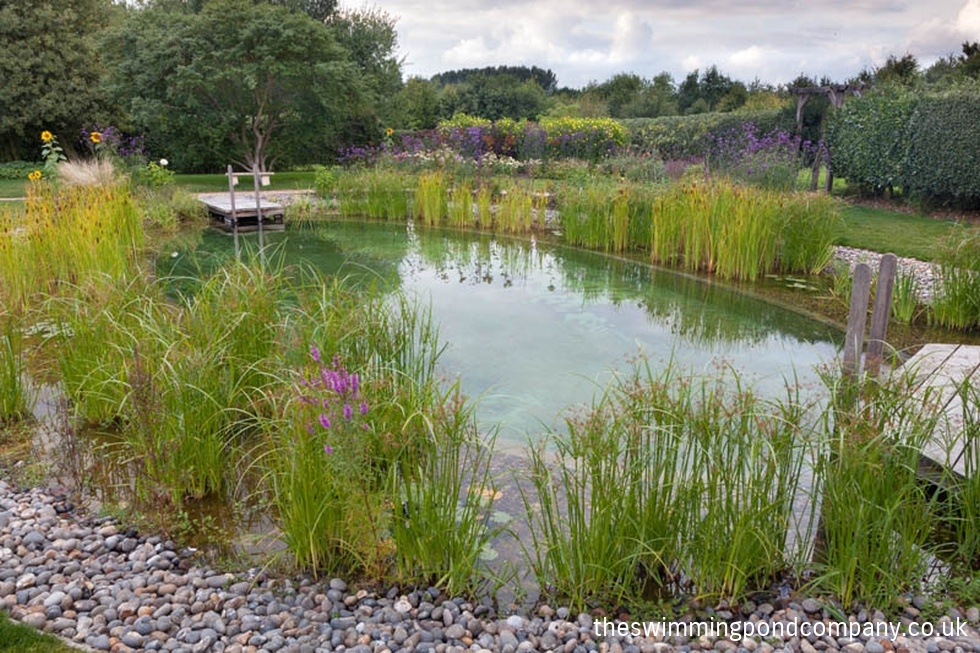 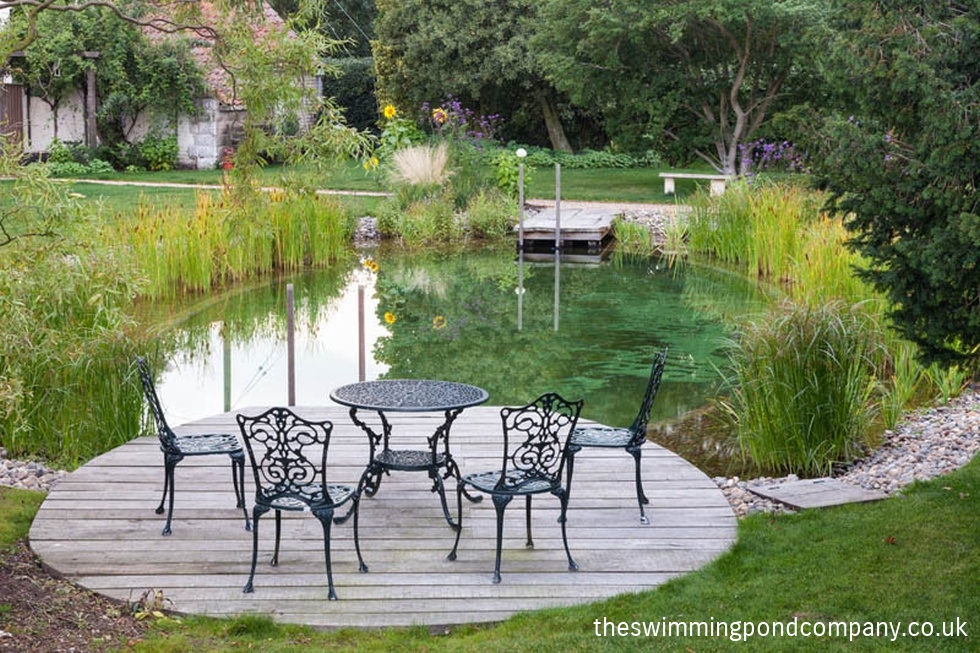 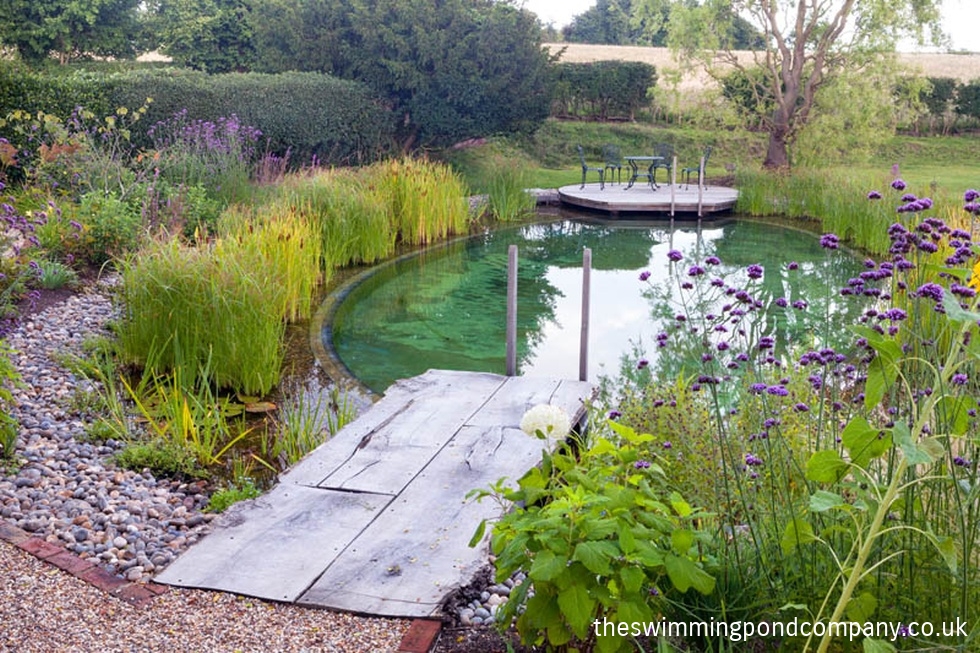 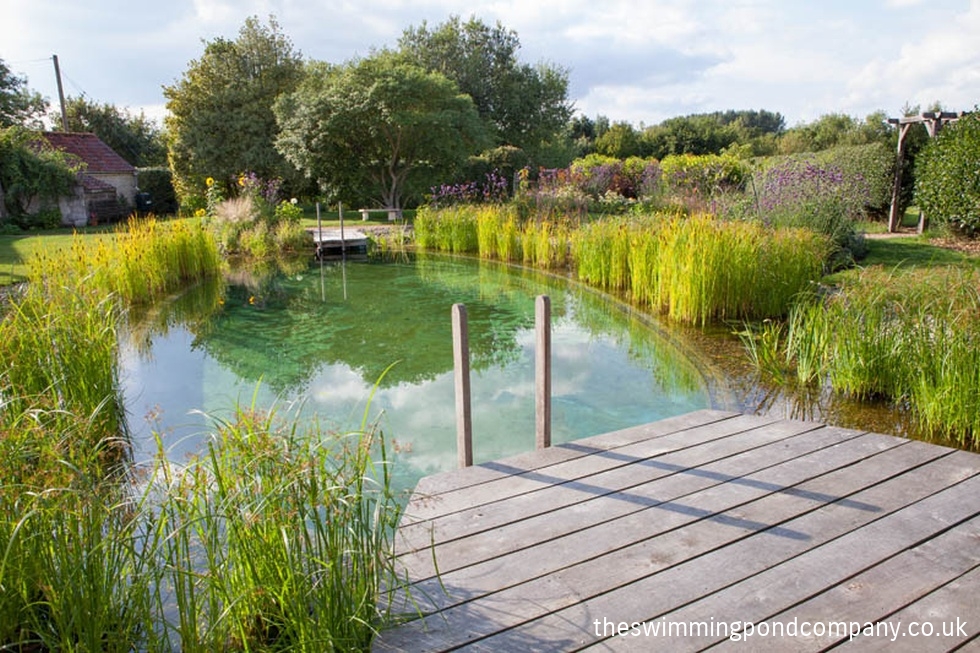 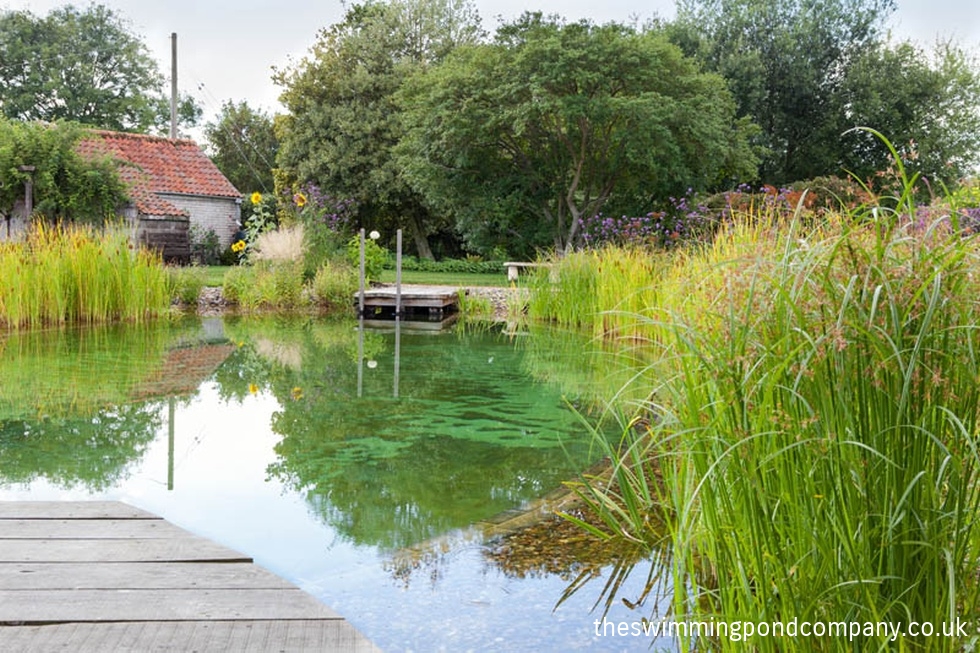 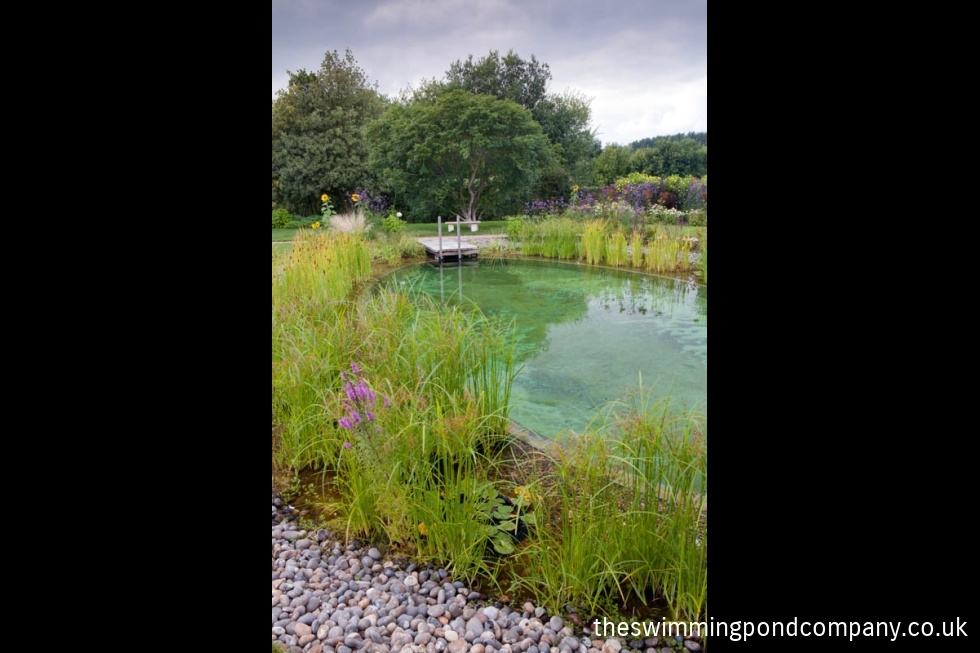 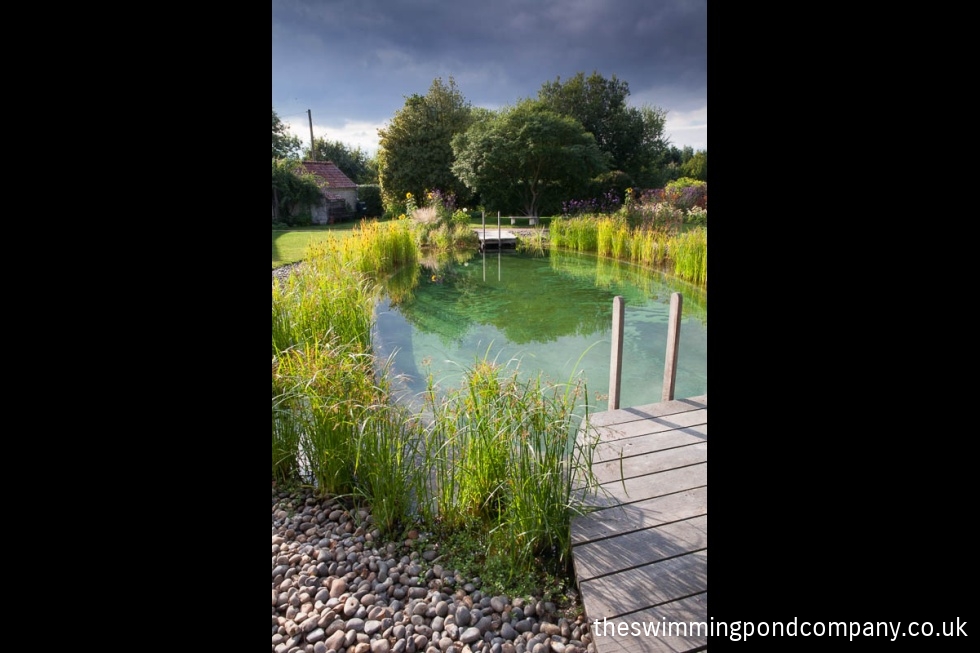 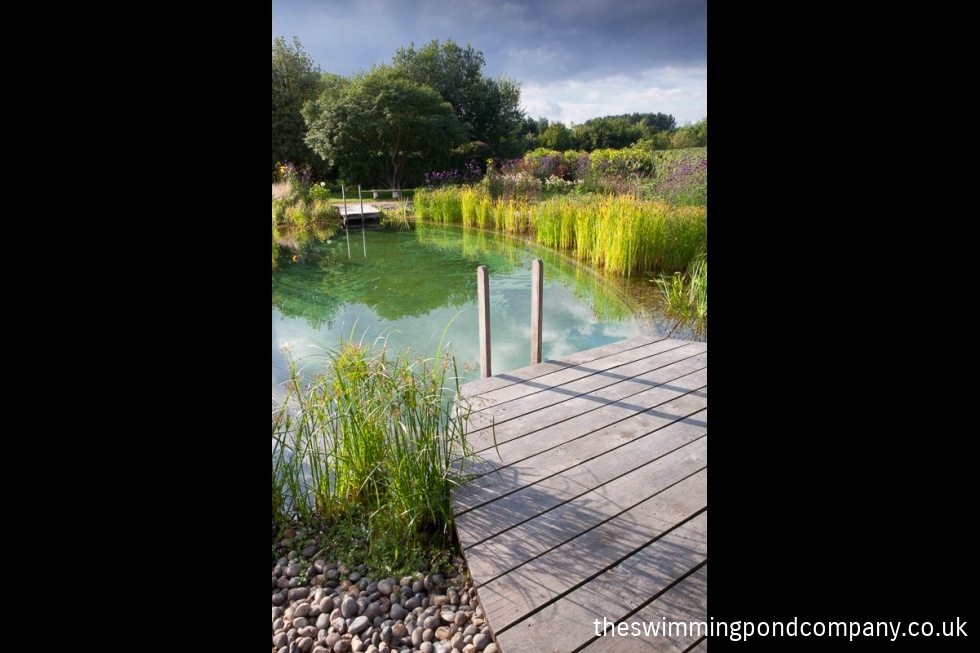 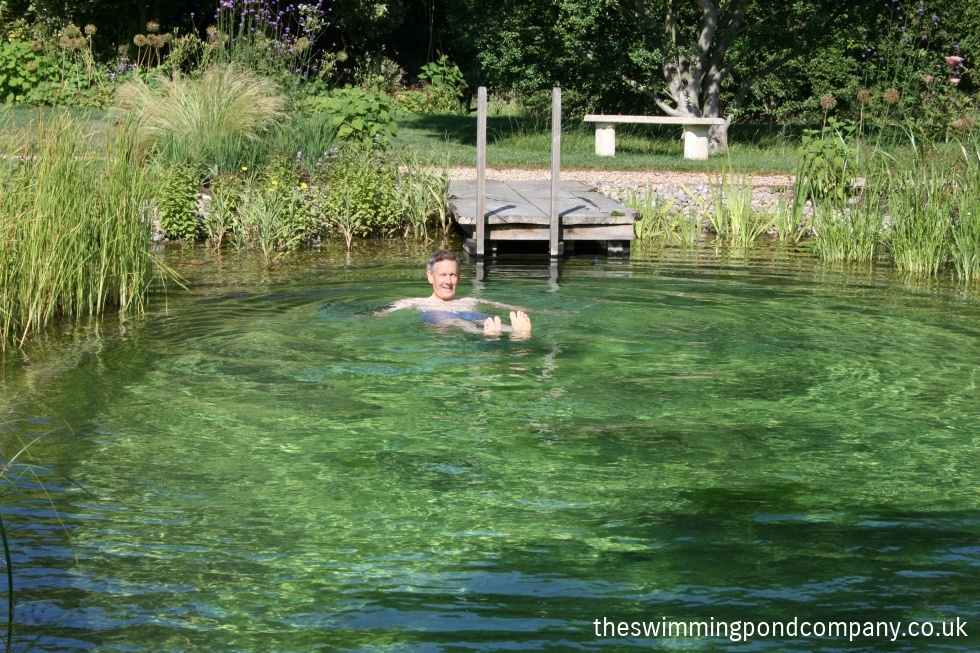 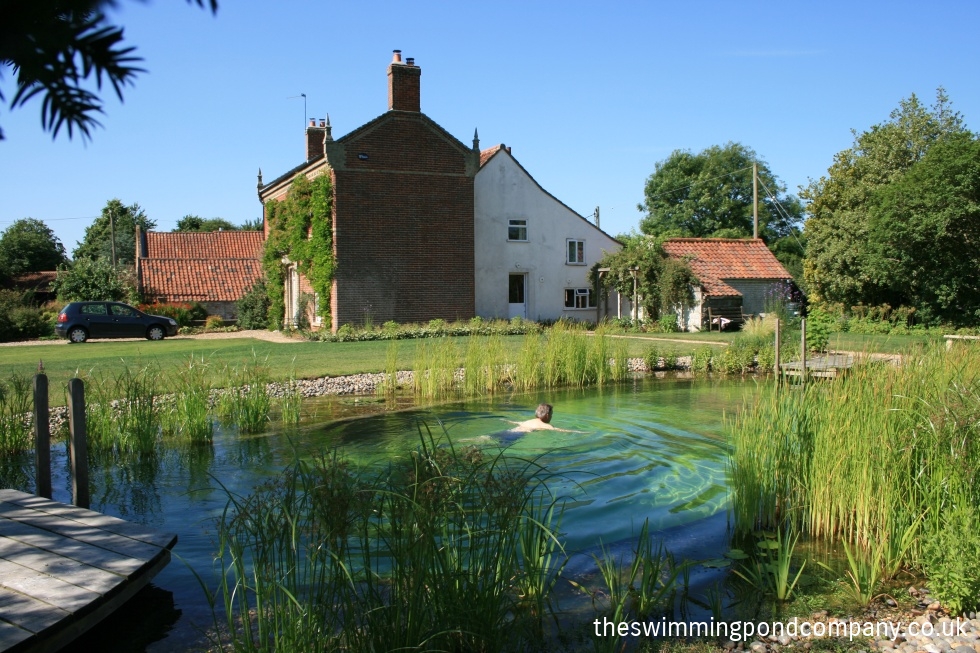 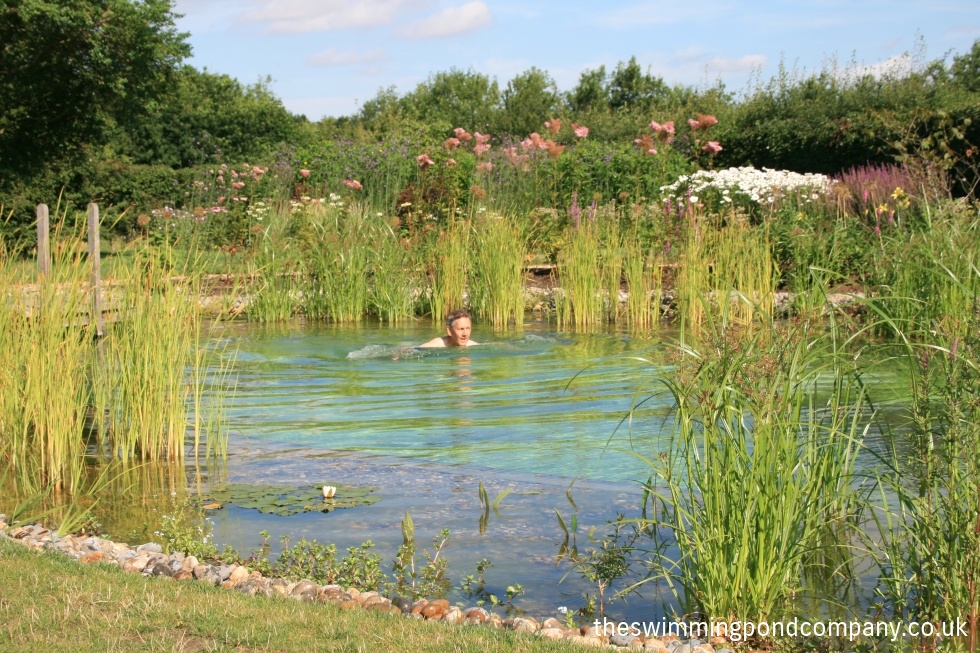 There were a number of large borders in the garden, which were really looking tired and past their best. Consequently, a blank canvas was in the offing. The only real constraint was a high water table existed, which would need careful consideration during the design phase.

An existing willow tree presented an opportunity to be incorporated into the design. In addition Frances and Michael had retained a number of large planks that were cut from an old oak tree, which had come down in the garden a few years previously and wondered whether they could be used in the project.

So, armed with a list of favourite plants and colours (not red and definitely not yellow) the design phase began.

The internal wall which separates the 2 zones is 1 m high and sits 20cm under the surface of the water, affording a depth of water just inside the wall of 1.2m. The swimming zone floor then gently grades down to a depth of 1.5m.

An oak deck has been positioned at the eastern end in the shade of the existing willow, which makes it a particularly lovely spot to sit in, on a hot summer’s day. A set of bespoke green oak steps provides access to and from the water from the deck. The sawn oak planks have been used to build a jetty at the opposite end of the swimming pond. The jetty also provides access to the swimming area and sits over the regeneration zone. Cobbles define the outer edge of the regeneration zone, which adds another feature to the semi-formal character of this pond.

Herbaceous borders have been repositioned to relate to the swimming pond and have been planted in a prairie style theme (bold groups of same species plants, which typically flower for long periods during the summer months and hold their architectural form during the winter months).

path, which runs along the side of the house and up to and around the swimming pond, finally terminating at the vegetable garden though an oak pergola.

This project was carried out through a particularly wet period and the water table was even higher than first envisaged, but with pumping equipment and clever engineering the issue has been addressed.

And this is what Frances had to say…

“We are both delighted with the transformation of our garden and do appreciate all the work you, Johan and the team put in to create the pond and new beds. I hope you will call in to see the progress sometime, do ring or email if you are likely to be nearby and can visit. We are very happy to show our garden off to any of your potential clients.

Michael was thrilled to see a kingfisher perched on the top of the ladder on the jetty yesterday morning, clearly hoping for fish! I did read that they will eat aquatic insects as well as fish so hopefully he will not give us up as a bad job of a pond!”