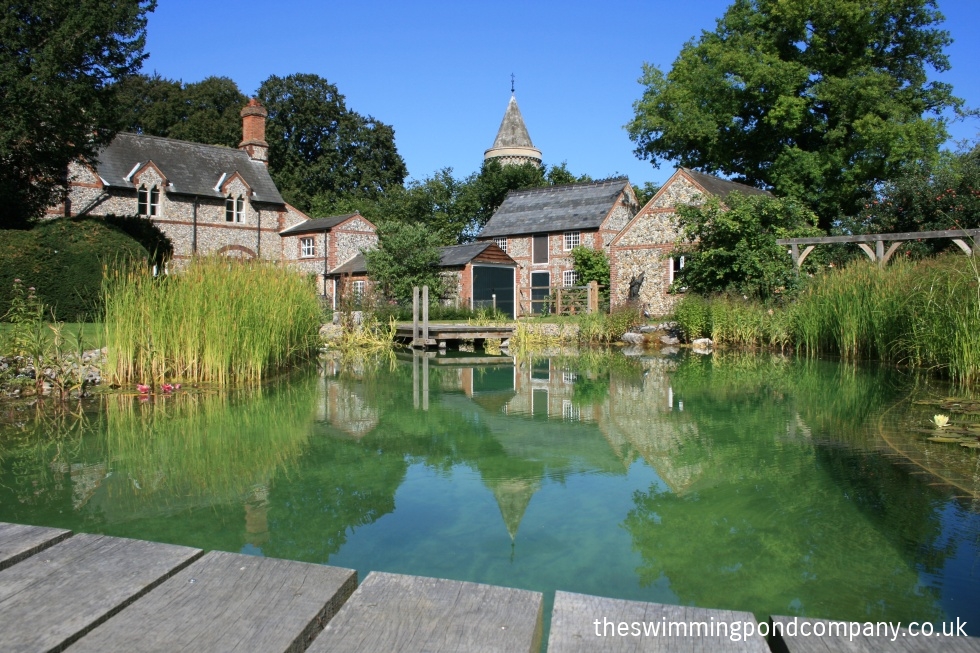 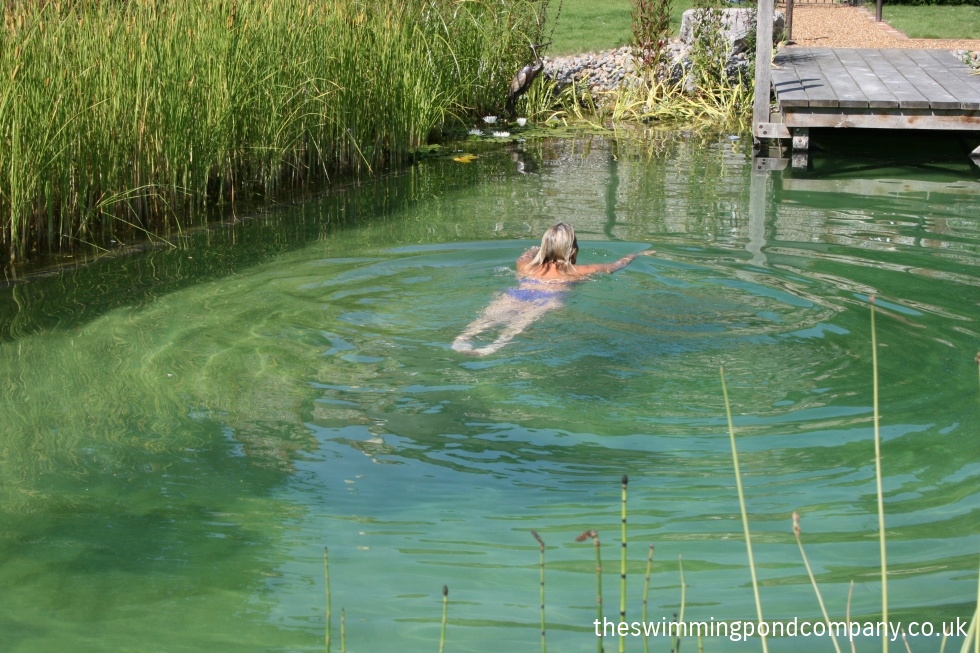 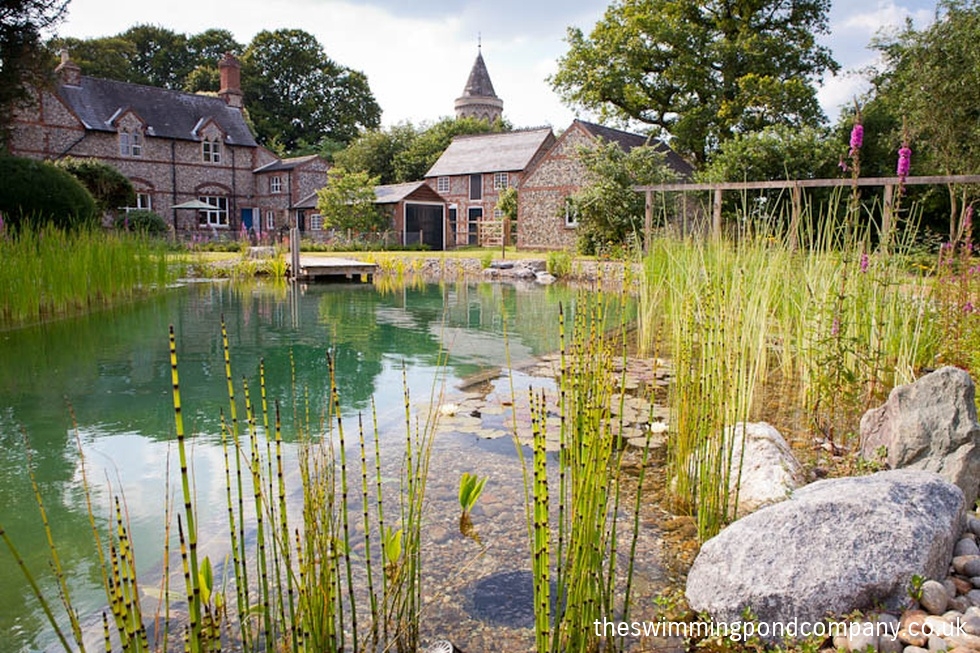 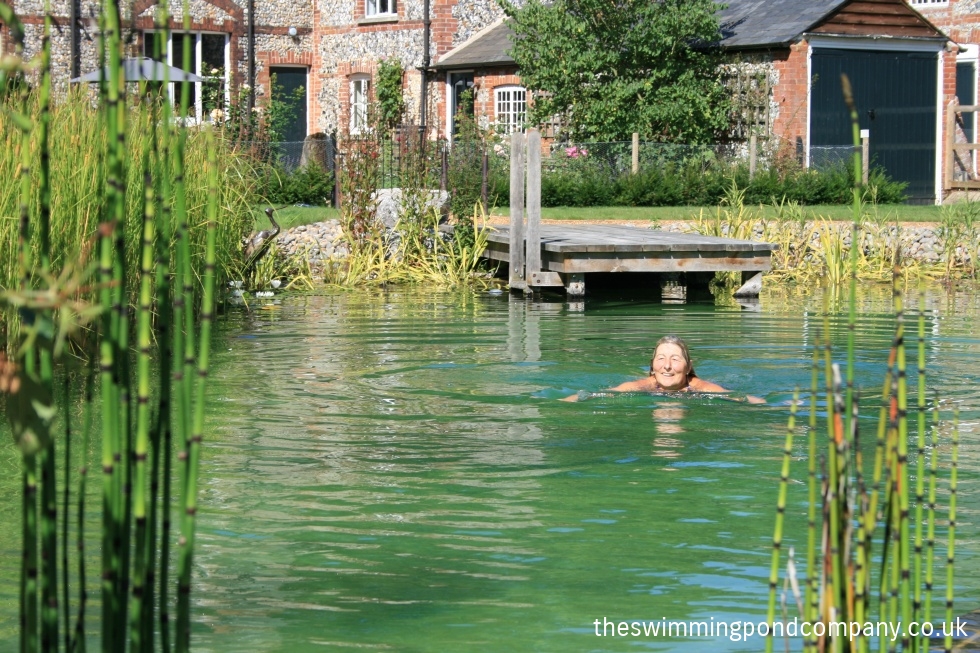 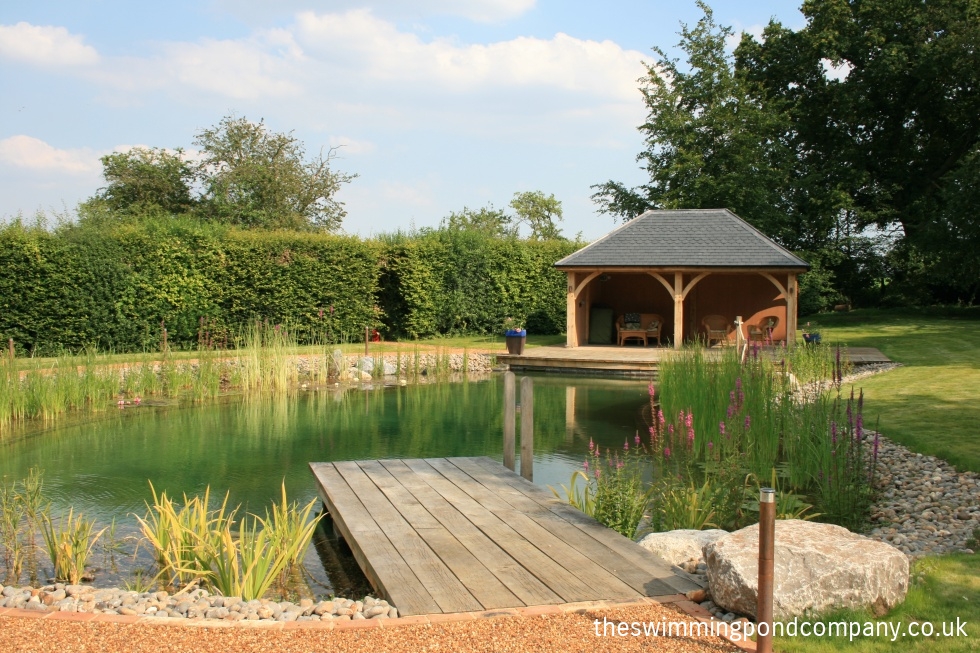 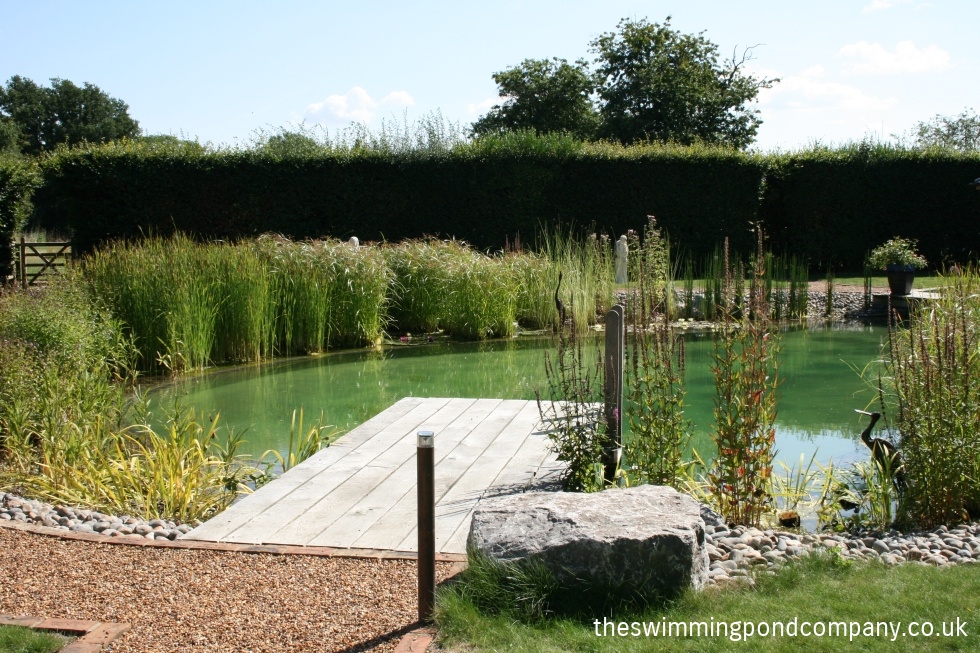 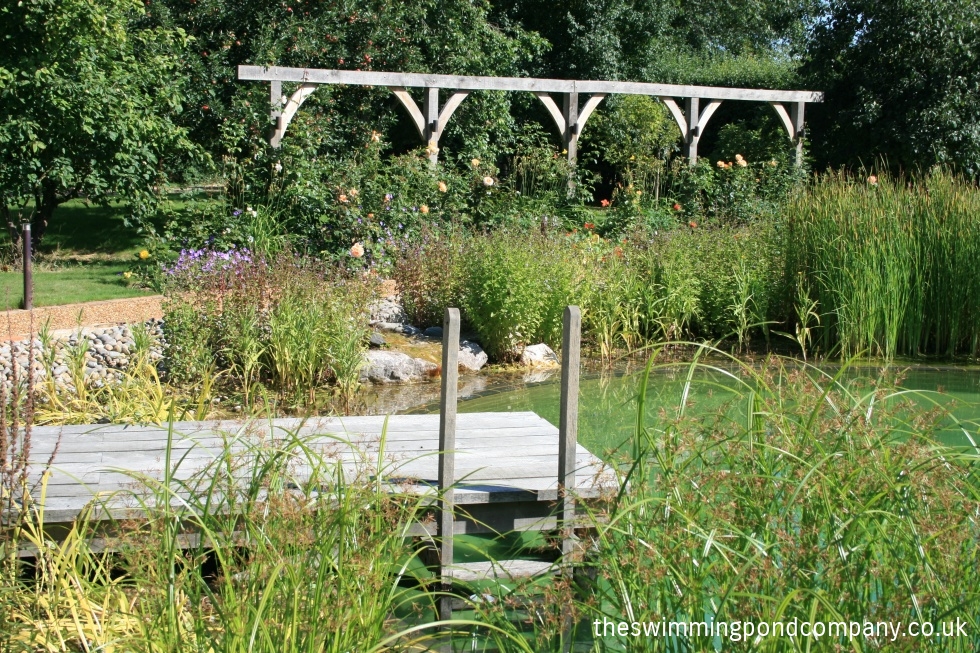 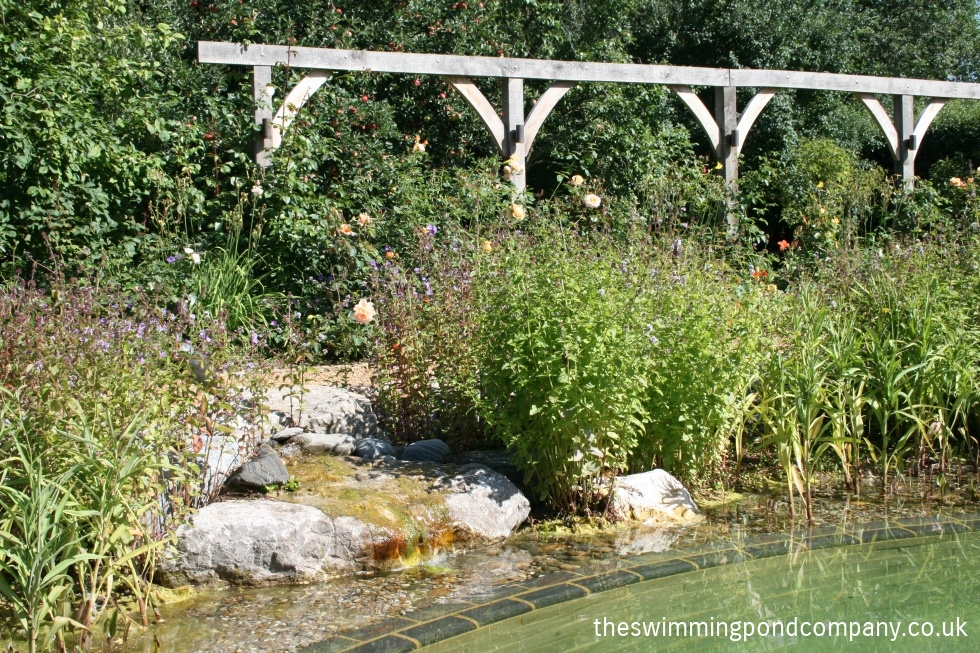 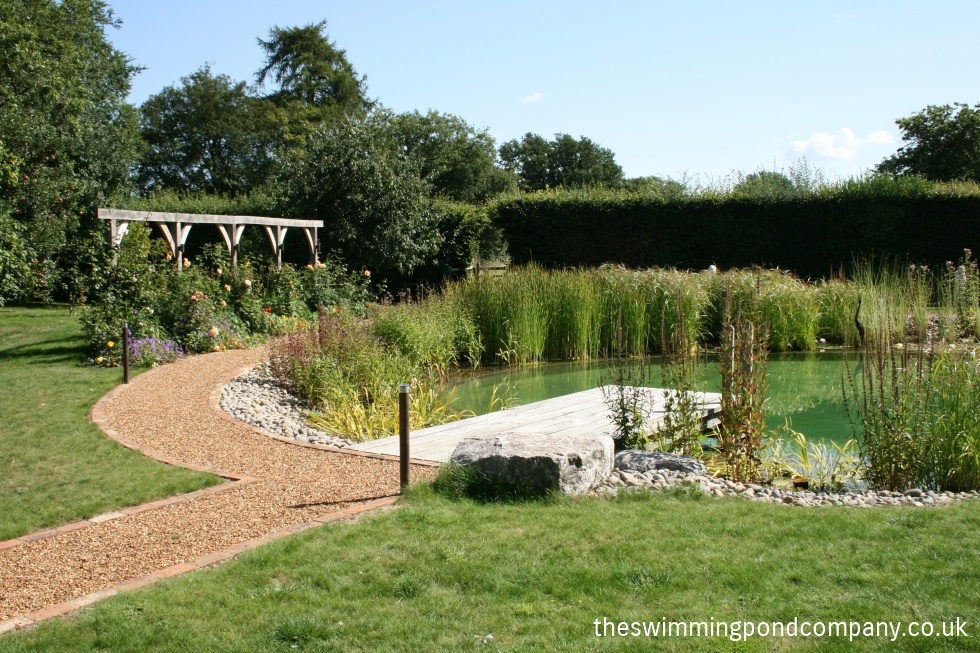 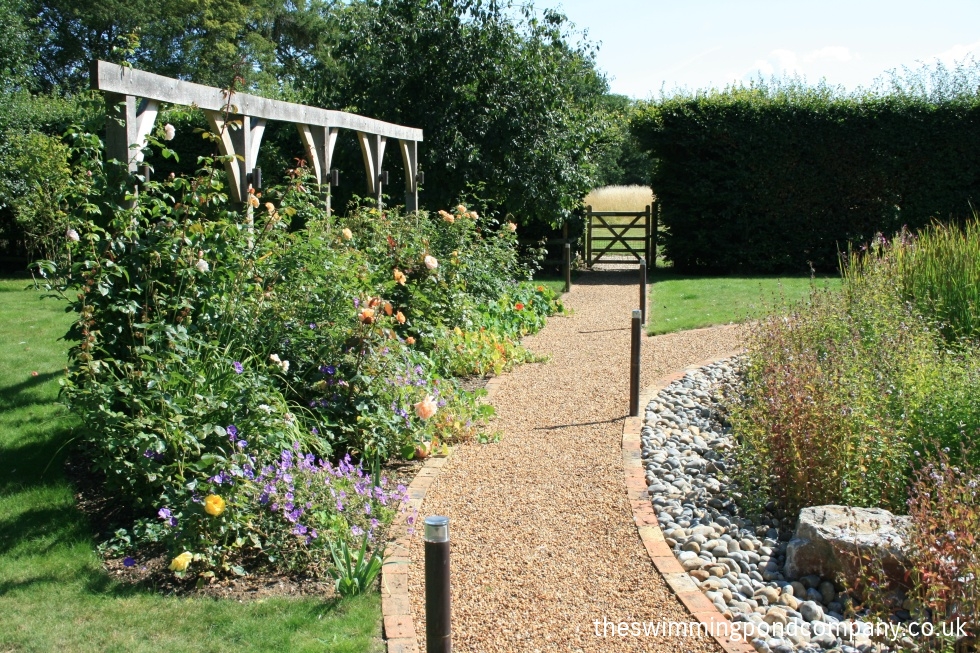 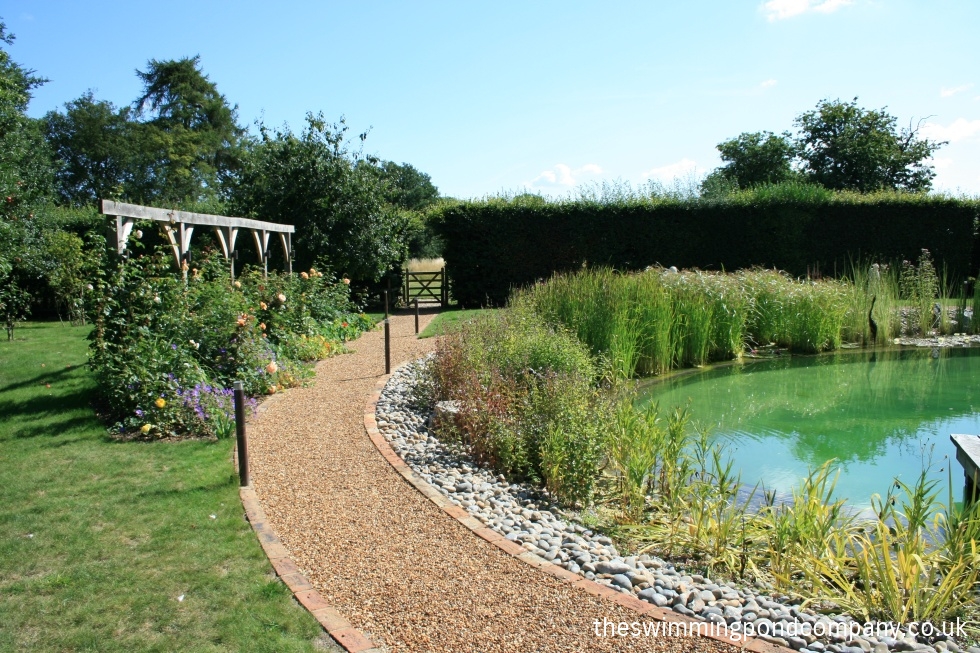 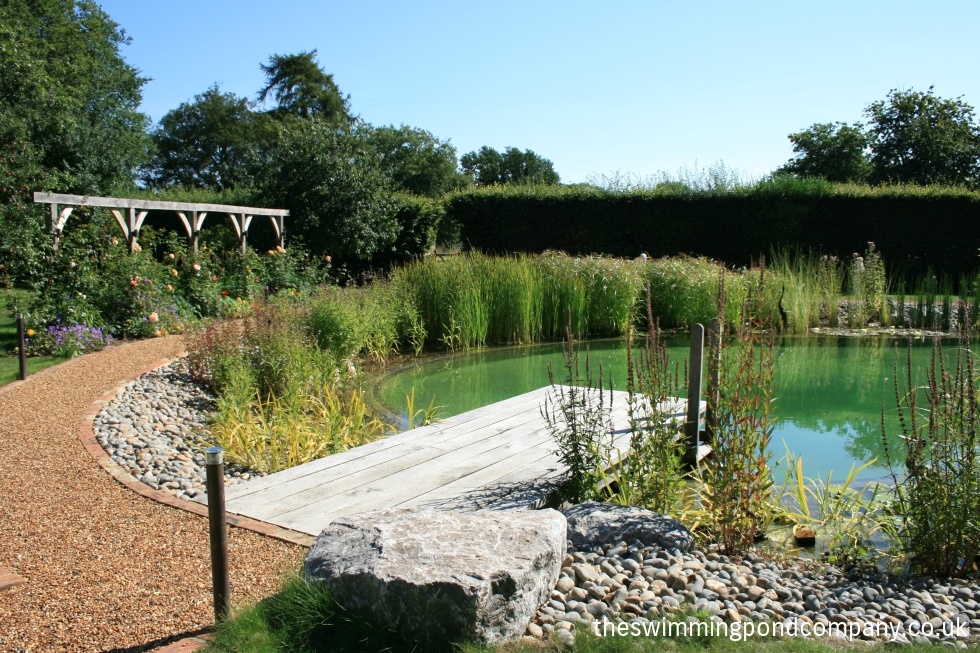 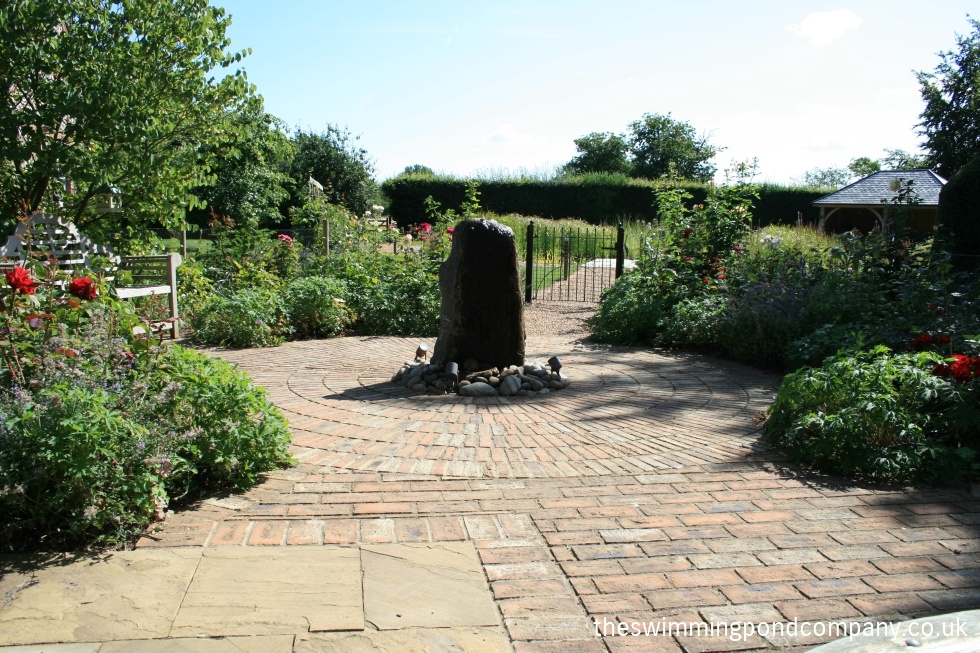 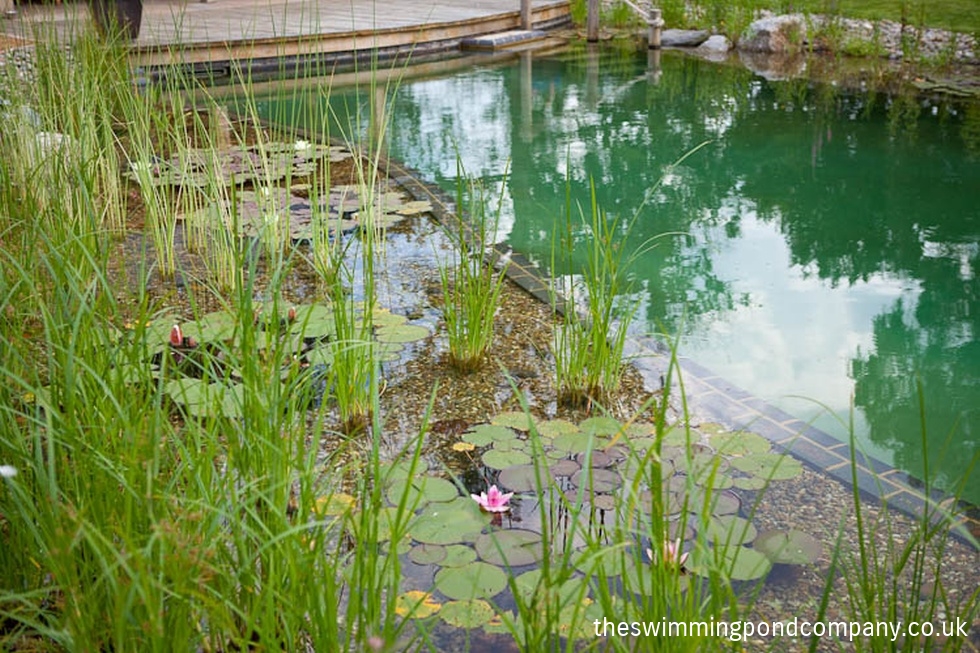 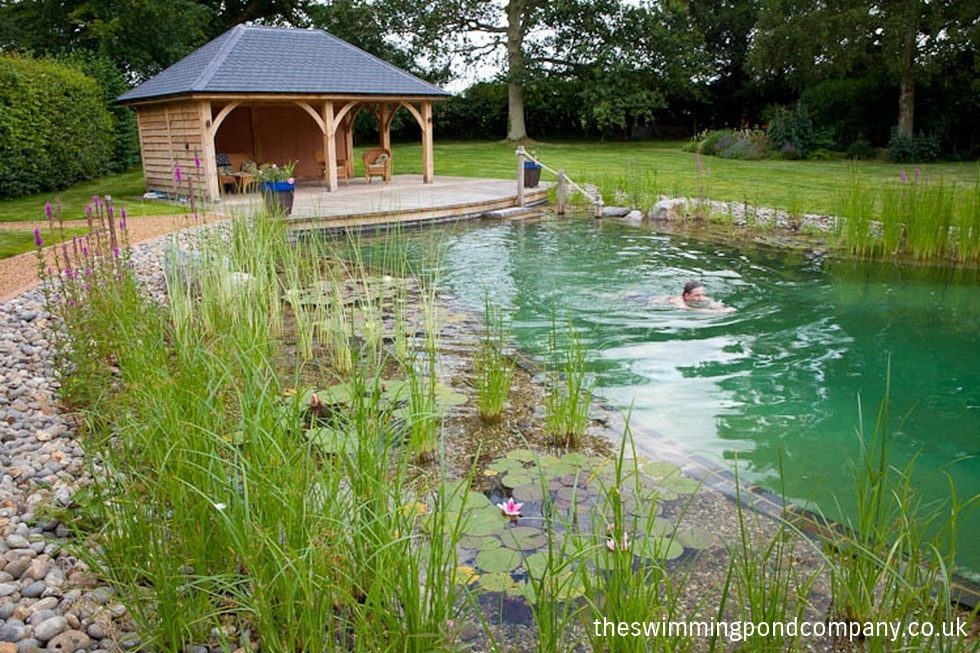 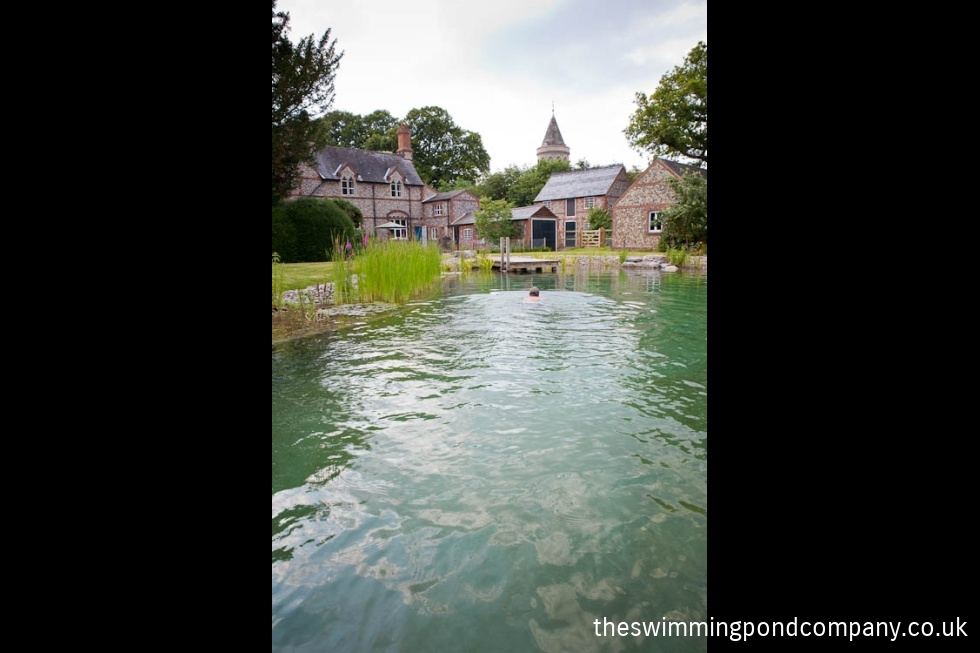 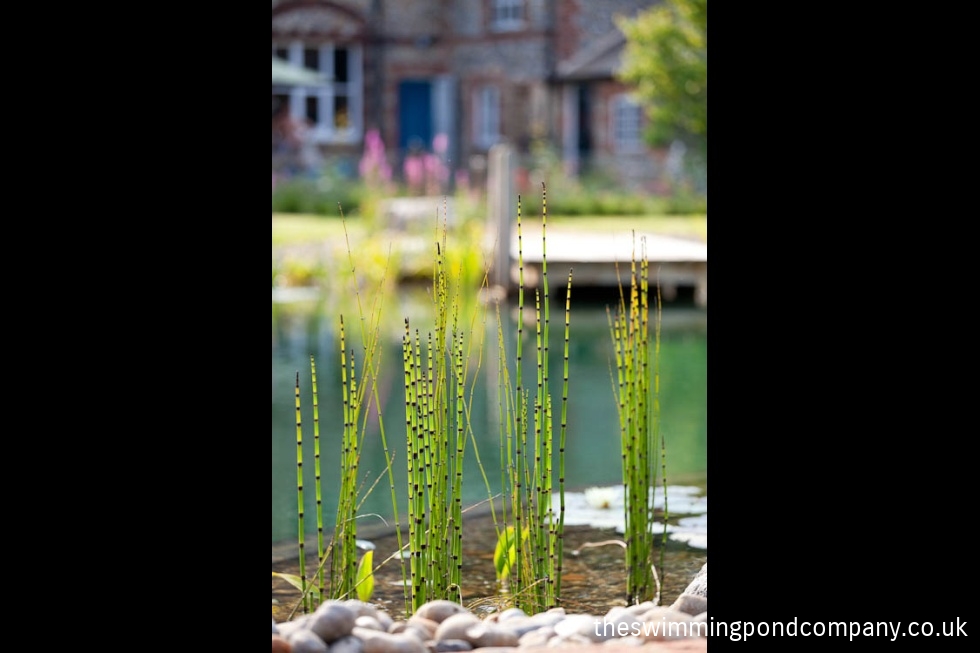 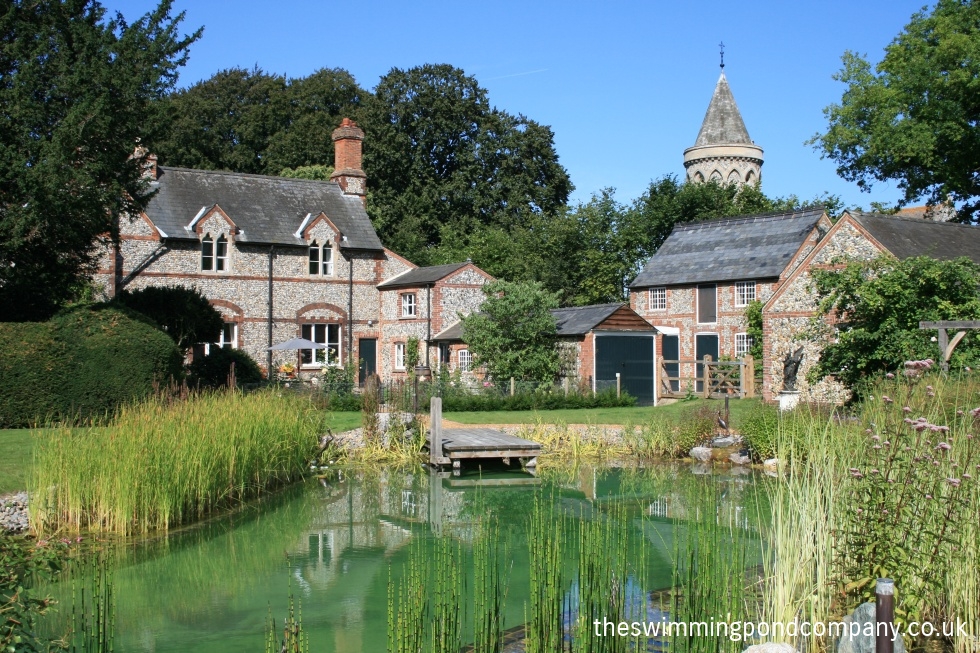 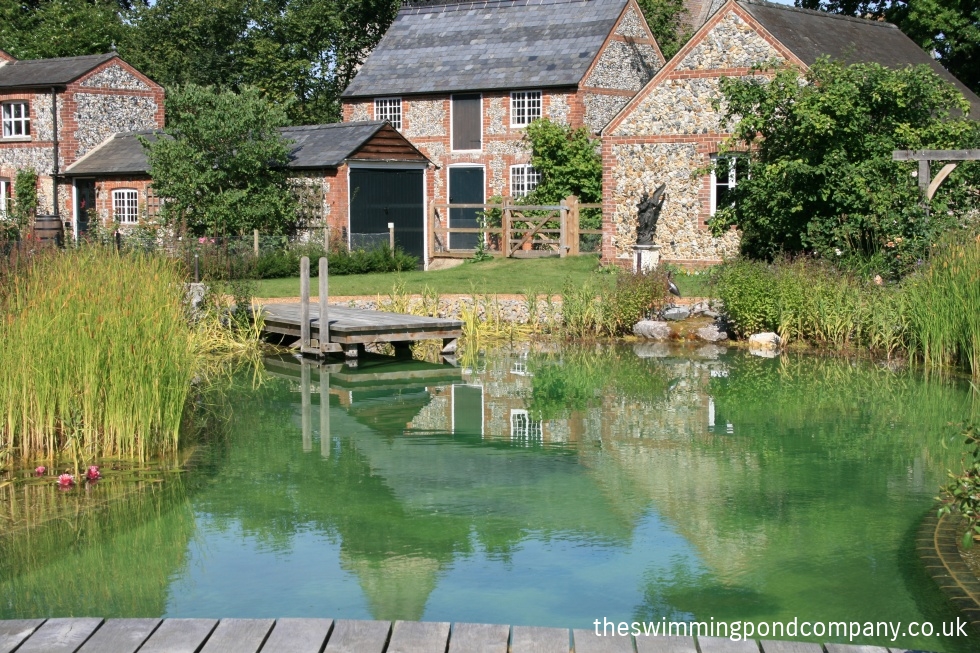 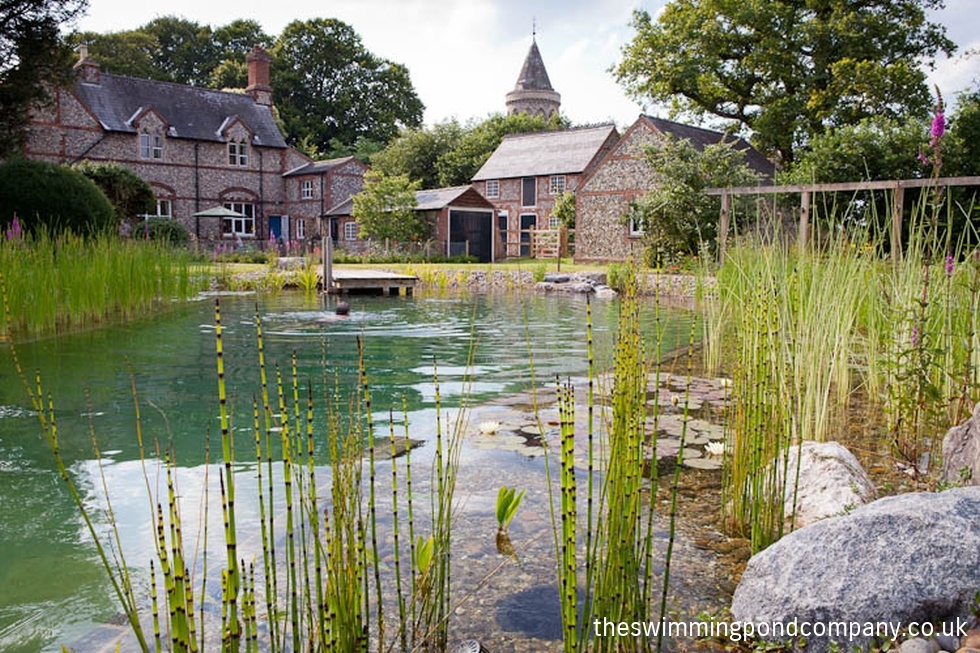 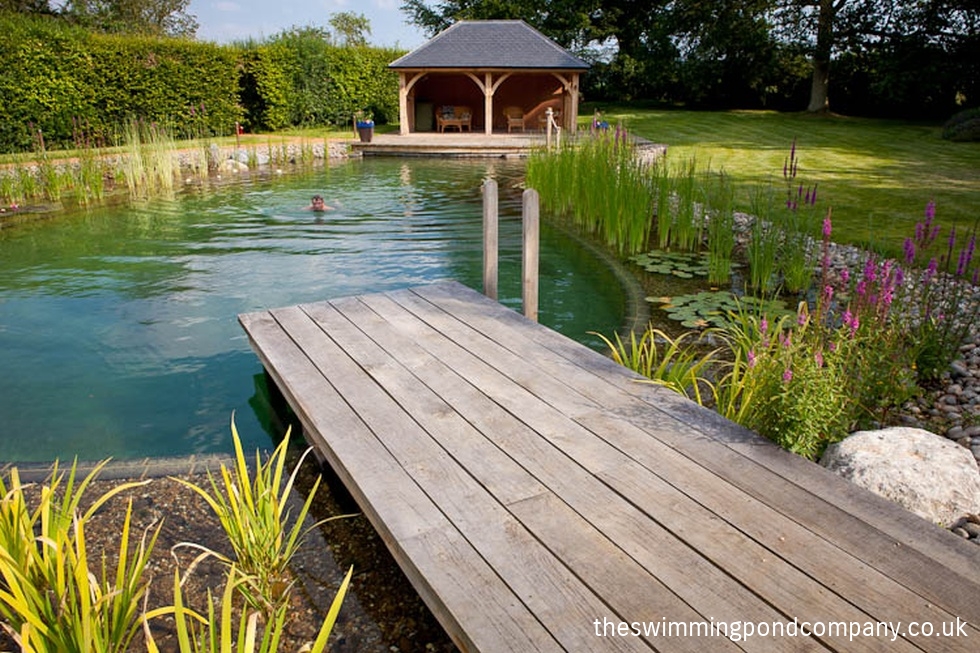 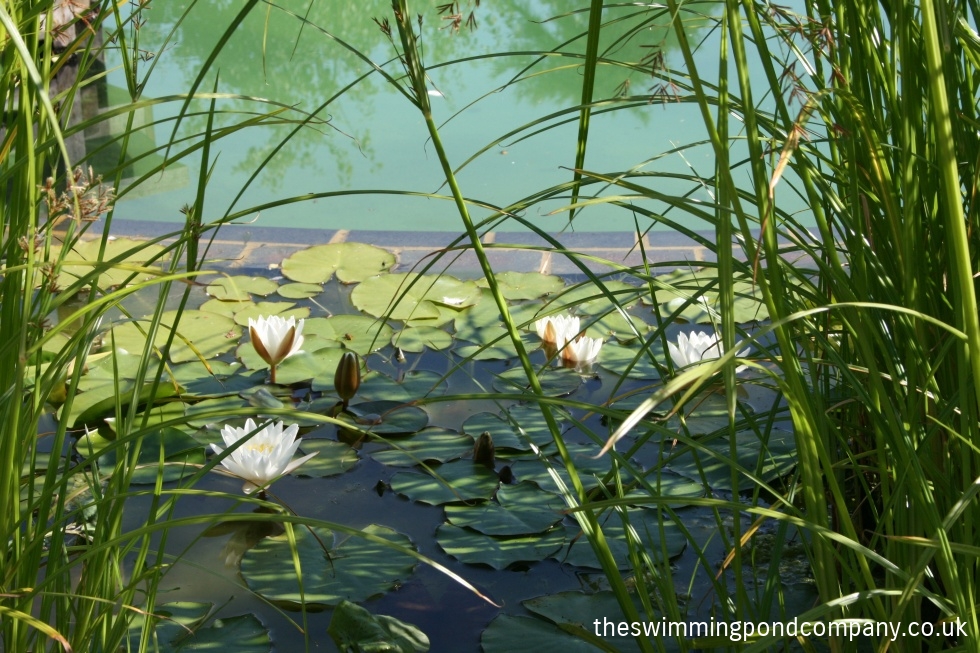 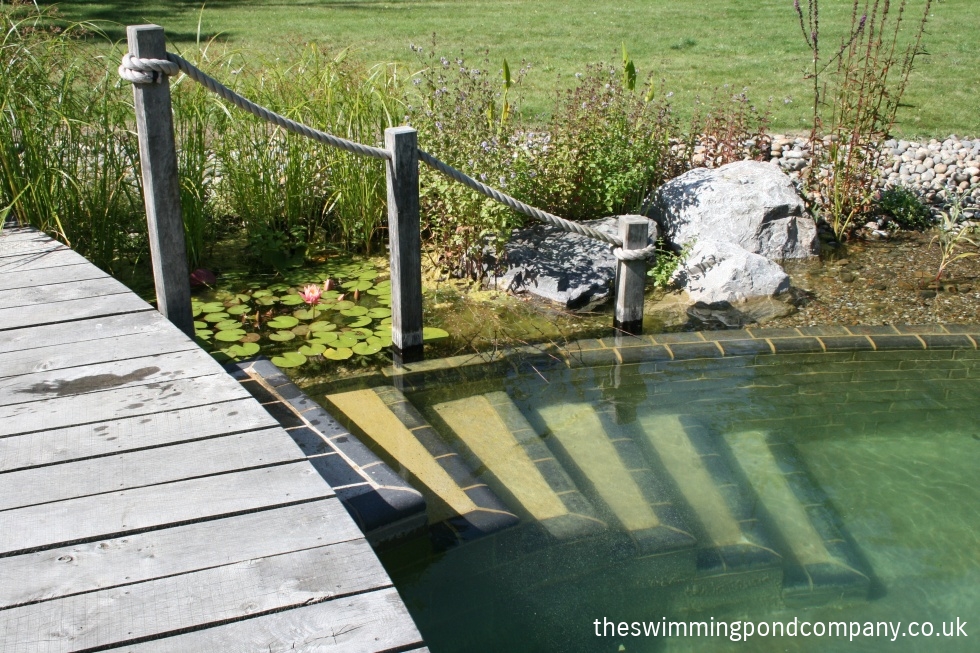 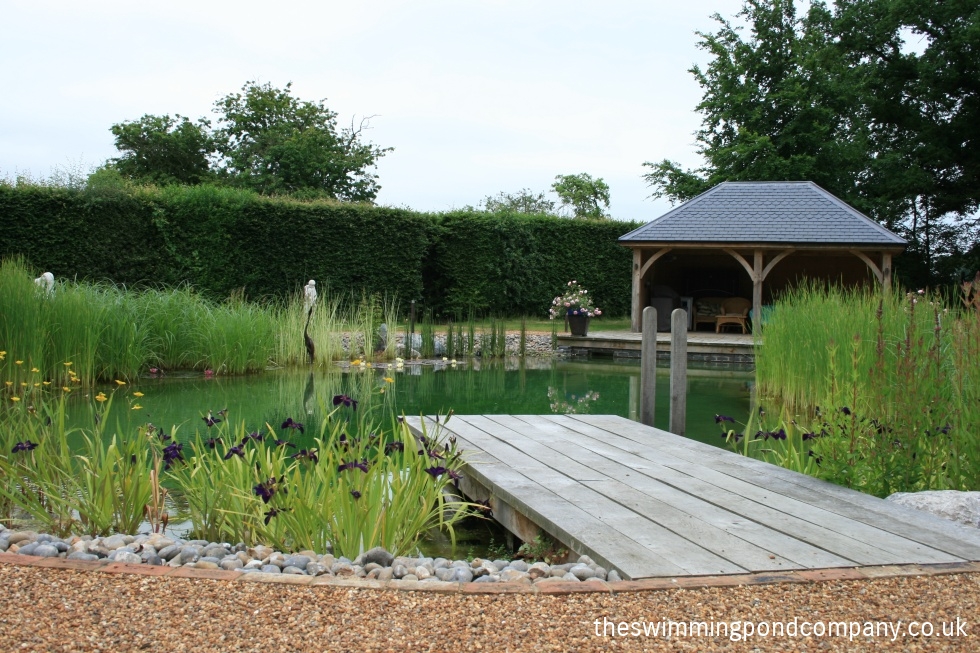 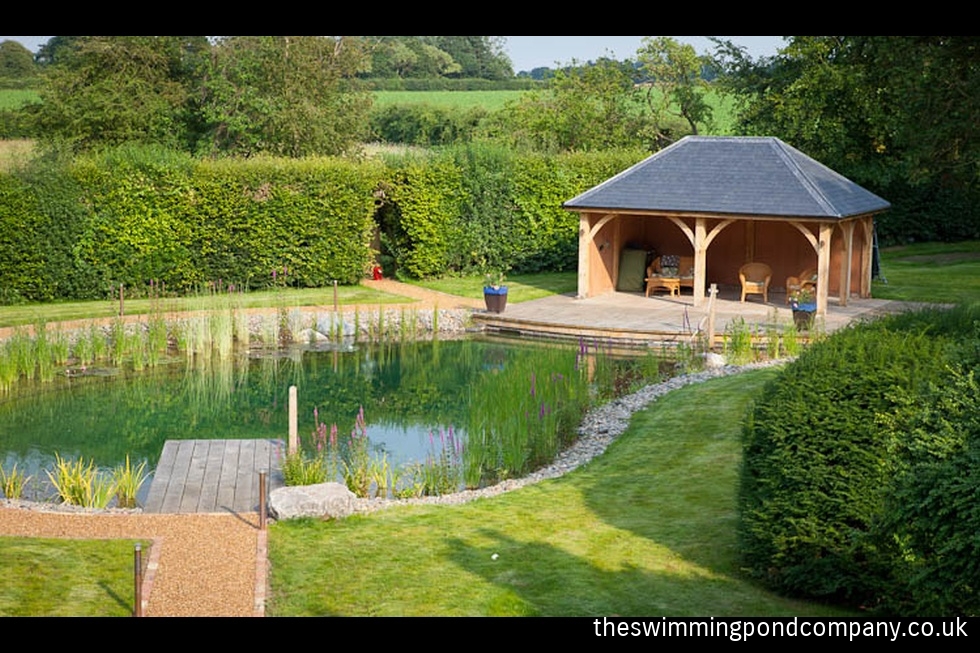 Old Parsonage House is home to retired farmers Gillian and Peter Cave, who moved up from Devon in 2010. Having had both indoor and outdoor pools in previous homes, they were particularly intrigued about the swimming pond concept, which they had initially read about in a magazine.

Peter is a keen conservationist and immediately saw the benefits of not only attracting an array of wildlife to their garden, but also being able to swim in natural chemical free water set in lush planting.

The initial site visit proved to be extremely successful as a fact gathering exercise. Conceptual plans had already been drawn up for a swimming pond and an oak pavilion, by Architects Chris Carr Associates, which presented a good starting point.

At that time Gillian and Peter had 8 Grandchildren ranging in age from 1 month to 12 years old, so the first consideration was naturally safety, but the emphasis was also to be on fun for the whole family and friends. They envisaged a deep diving area, since the older children loved nothing more than jumping and diving into water. The pavilion was to act a focal point and to serve as somewhere for outdoor entertainment and large enough to seat 12 people for lunch.

Additionally, as well as traditional ladder steps, they thought it practical to have internal brick steps to make life easier for the older members of the family. The sound of water was important and the inclusion of some large boulders as feature stones was also on the wish list. Gillian is particularly passionate about roses and so a rose garden was an absolute must, within the design. Finally, outdoor lighting was to feature throughout the design.

With the brief in place, we began by developing the initial concept plan and this evolved into the design plan. The swimming pond was carefully positioned so that it could be clearly viewed from within the living space in the house, which ensures that the feature can be enjoyed on every day of the year, rain or shine.

The area to the rear of the house was designated the rose garden. Roses, under-planted with geraniums now enclose a seating and transitional area paved with interlinked York stone and brick weave. A standing stone water feature is central to this space and creates movement as well as being visually appealing. The rose garden is enclosed by 2 walls of the house and a yew hedge, which has a temporary fence running down the centre of it (the hedge will completely hide the fence in time), so that effectively, the swimming pond is fenced off to ensure the safety of the younger children. Climbing roses will in time, work their way up an oak framed pergola, which has also been included as a garden feature.

With fun in mind, a jetty has been positioned to bridge the aquatic planting of the regeneration zone, so that the more adventurous can throw themselves into 2.5m of water. To exit the water a bespoke set of green oak steps have been attached to the jetty, which as well as being practical are a feature in itself.

The sound of running water is ever present as it bubbles over a collection of small boulders set amongst reeds and close to the jetty. Additional boulders have been positioned both inside and outside the water to dramatic effect. A formal brick-edged shingle path links the rose garden to the garden building.

Extensive outdoor lighting brings the whole area to life in the evening. Feature lighting has been used, for example to light up the pergola and the standing stone water feature. An up-lighter dramatically illuminates a small tree in the rose garden and path lighting is achieved by surface mounted bollard lights in a copper finish. Spot lights are particularly effective when directed on favourite roses.

This is a beautiful, much loved swimming pond completed in Spring 2012, with an area of just under 200m² and a swimming area of 85m² but is best summarized by Gillian herself in the following testimonial…

Considering a conventional swimming pool? This is what Gillian had to say on the matter:

“Over the last thirty years, we have had both types of conventional swimming pool at different properties – a large outdoor pool and a smaller indoor pool.  Both pools required a great deal of effort and expense to keep clean and disinfected.  When we bought our present house in Suffolk, we thought again about swimming pools and an old friend who is an architect suggested we should look at swimming ponds, as he felt that one would fit in so well with our lovely old listed vicarage which is also in a conservation area.  Once we had visited Paul’s lovely swimming pond, we were hooked and had to have one!

It really is one of the best decisions we have ever made.  Crystal clear water with no chemicals, beautiful plants all around as you swim, easy to keep looking good and wonderful to look at whatever the season and whatever the weather.  Unlike a conventional outdoor pool, which has to be covered from autumn to late spring, this pool is always open and a very attractive feature in the garden.  Swimming is a joy.  Our grandchildren love using a mask and snorkel to see the various small creatures which share the pool with us as well as jumping in and swimming and one of the nicest things is to watch the swallows in mid-summer as they fly down and skim the water to drink.

The swimming pond looks fantastic in the garden – a beautiful feature admired by all who see it.  Thank you so much Paul and thank you to Johan, Steve, John and the boys. You all worked so hard and put in the extra effort all the time to ensure that we were delighted every step of the way including the complete re-design and building of the rose garden and terrace connecting the pool to the house. We love it.

We have no hesitation in highly recommending The Swimming Pond Company.  Well done!”